I was desperate to make a gingerbread house this year.  Probably because last Christmas I took part in a gingerbread competition (we did an Occupy the North Pole theme) and the competition this year was canceled!  What a let down!  So I decided to go solo and came up with tiny gingerbread houses on cupcakes.  Totally cute in my mind and I have to say they turned out not too bad.  Let me know what you think.

Before I begin?  Where did gingerbread come from?  This is always an interesting question because the beginnings of any foodstuff is murky.  Gingerbread is no exception.  It all supposedly started in Medieval Europe in the 11th century with spiced ginger cake.  Sometimes the cake was hard and sometimes it was soft.  The ginger itself probably came from Asia and I don't know if they have their own variety of ginger cake.  Germany built on the popularity of gingerbread and to this day there are little towns who specialize in gingerbread creations.  And then the Grimm brothers happened.  Hansel and Gretel came to life in their writing and the candy-covered gingerbread house became a mainstay in the popular imagination. 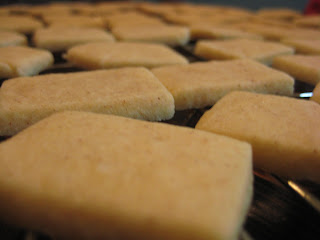 First of all I need to confess that I didn't make gingerbread.  I made ginger spiced sugar cookies.  To make the cookies, I followed a Sweetopia recipe.  Just a side note: What an awesome site!  The things that woman can do with icing!  The only change I made is cutting the recipe in half and only using 1ml of baking powder so the cookies didn't puff up.  The fabulous thing about sugar cookie dough is that it's hard to overwork so you can roll it and re-roll it and re-roll it.

I also used her royal icing recipe but really it's just icing sugar with some water and cream of tartar.  I don't use the meringue powder but you might want to if you are making something large and architectural. 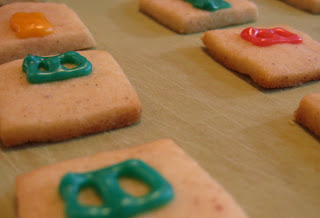 1. Roll out the dough nice and thin.  Using templates, cut out the required number of pieces.  I needed 24 side walls, 24 roofs, and 24 peaked walls.  Now that I have tried this out, I recommend making them as small as manageably possible.  Mine were small but once baked, they did get bigger.


2. Let them cool and then decorate.  I put doors on the peaked walls and tiny windows on the side walls.  I tried making tiny wreaths but my icing point wasn't fine enough - that would be really cute doncha think?  The roofs got the special treatment: 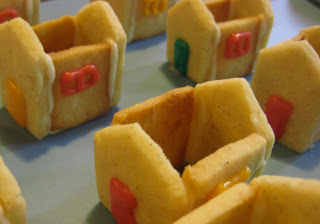 3. Let everything dry.  Don't rush this step because you will just smear all your beautiful handiwork.  Put two lines of icing on the outer edges on the inside of one peaked wall.  Take two side walls (the ones with windows) and attach them with the windows facing out.  The walls will be wobbly so let them dry a little bit and then adjust so the icing is a bit stickier.  Using two lines of icing on the other peaked wall attach it to the other side of the two side walls.  Hold the whole thing together for at least 30 seconds and then set it aside.  Let it dry.

4. Put icing on the top edges of the peaked wall and on the inside edge of the roof pieces.  Place the roof pieces on and hold in place for 20 seconds.  Fill the middle gap with icing and then hold the roof in place again.  Let it dry for a while. 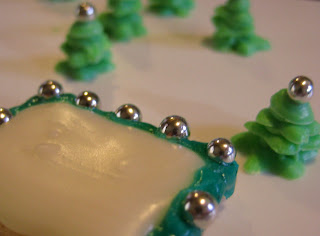 5. Draw a line of matching icing along the centre line of the roof and place a silver bead at either end.  Let it dry completely.

6. I decided to add an extra touch - a tiny Christmas tree out of white chocolate.  A little surprise for the person who eats the cupcake.  To make the tree, draw four or five circles on a piece of paper, each one progressively smaller.  Tape the piece of paper down and then cover it with a piece of saran wrap, also taped down.  Melt and color some white chocolate and put into a piping bag.

Pipe jagged shapes into each circle - don't worry about how they look too much because the overall effect will be awesome.  For the last, smallest piece, I placed a silver ball on top with tweezers.  Once the pieces are dry, put a dot of chocolate on top of the largest piece and place the next size up on top.  Continue until the tree is assembled.  Be careful, the pieces are delicate. 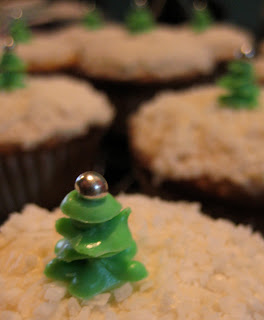 7. Whoo!  What a process.  I am not going to say how many hours this took me, but suffice to say, many.  Now make some cupcakes (or do this earlier, whenever works for you).  I used a cake mix because I was spending so much time on the other elements.  I added cinnamon, nutmeg and clove for some kick.  Let them cool and then cut out the centre.  I filled the cupcakes with coconut jam, which is just a cup of coconut milk and a cup of sugar cooked down like a dulce de leche.  I also added a squirt of lemon juice and a pinch of baking soda.  Really yummy...

8. Now it is time for the cupcake icing.  I made a coconut buttercream with my leftover coconut jam (about 2 tbsp), 2 tbsp of salted butter, about a cup of icing sugar and enough coconut cream to make it spreadable.  Once this was all whipped together I added about half a cup of shredded coconut.

Do you understand now why I used cake mix??? 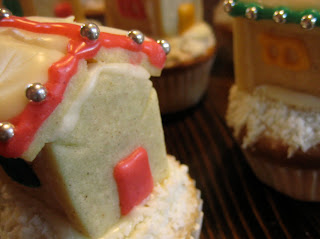 Whoa so yummy!  The house got ooh's and aah's to no end.  Totally worth the effort.  I also entered my little fairy house into a cupcake competition over at Movita Beaucoup.  It will be posted tomorrow just in case you want to vote for me, ahem, hint. hint.


Up next?  Making Queso Blanco.

Shonagh explores the guts of food in An Offal Experiment.
Posted by Unknown at 8:14 PM