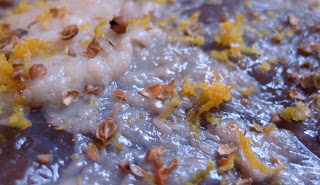 Every Christmas all of the cousins in my family do a Christmas gift exchange.  This year I got my cousin Hamish.  He's the perfect person to gift with his love of all things meaty.  So what was I going to get him?  Hmmm, ponder, ponder, ponder.  Ahhhh, yes.  Bacon.  No, pancetta.  No, smoked pancetta!  The best of both worlds!

I decided on two types of pancetta.  The first would be flavoured and the second would be smoked and flavoured.  And guess what?  I got to build a smoker.  Oh yes.  Read on...

The first pancetta cured in salt and sugar, diced preserved lemon, toasted coriander and thyme.  I let it sit in the cure for a week, the water slowly seeping out as the salt and lemon worked their way into the belly.  It got a little bath to rinse off the salt and sugar before I grated fresh lemon peel straight onto the belly and then rubbed it with toasted and ground coriander.  Into the drying closet it went. 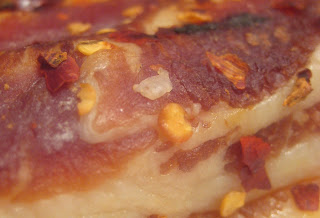 The second pancetta cured in salt and sugar, hot flaked red pepper and one clove of garlic.  It sat with the other belly, also being massaged and flipped every couple days.  After rinsing, it got another dusting with hot pepper flakes then it was time for smoking.  But I have no smoker!  What's a girl to do?  In my case, I decided to build my own and it worked like a hot damn.

I started with a kettle barbecue.  The little black one that people bring down to the beach.  There are four vent holes out of the top of the barbecue and to that I attached a ProFlex Dryer Vent Duct, with tape.  Oh yeah.  Hi tech.  I cut the dryer vent duct in half, which was the hardest part, and attached the other end to the barbecue grill with twist ties.  I suspended the grill between the backs of two chairs and then on top of the chairs I placed an oven rack.  Voila!  An ultra cold smoker!

I'm not sure what temperature a cold smoker is at normally but I wanted mine as cold as possible because I didn't use any pink curing salt.  How perfect that it is winter in Vancouver right now so it is about refrigerator temperature outside.  My little belly sat on the oven rack above the dryer vent for five hours and I didn't have to worry about food safety at all! 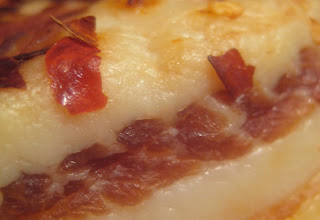 For the smoke itself, I used mesquite.  To light a fire, I bought Lokkii bricks from Canadian Tire and then put handfuls of damp mesquite chips on top of the Lokkii every 20 minutes or so.  The package said that each large charcoal chunk lasted for two hours but mine lasted longer than five hours.  I just stopped after five hours because it was late and I wanted to go to bed.

The belly took on a beautiful color, which I greatly admired as I hustled it down into the drying closet.  Now when I say drying closet, I really mean my unheated storage locker.  And let me tell you, it is smelling smoky.  Sorry other tenants!

After two weeks of drying both pancettas were given a tin foil blanket and passed off to my cousin.

I have no idea!  My cousin is getting four pounds of pancetta and I hope he enjoys it...  Maybe he'll comment on my blog!

Shonagh explores the guts of food in An Offal Experiment.
Posted by Unknown at 10:52 PM