Culatello or the King of Prosciutto

If culatello is the king of prosciutto, what is the queen?

This was the first question that struck me as I started to read and learn about culatello. 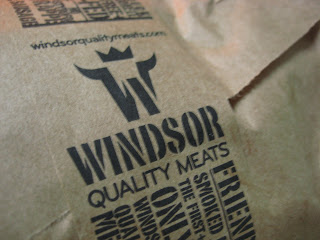 Let's start with the pig, a gorgeous black color.  The pig version of the little black dress.  The thigh itself is large with fat winding its way through: Can you think of a more feminine image than a luscious thigh?  The process itself is simple, some would say almost self-contained, there's none of this dicing and slicing and wrapping in a bladder.  It is the thigh and salt, like a woman with character, nothing else is needed.  And of course, it's pricey.  Jamon Iberico de Bellota, the queen of cured ham.

Unfortunately, for this post I am playing with the king.  For several reasons.  He's smaller.  The culatello cut is only part of the back leg, the rump if you like, or the ass if you're feeling a bit spiteful.  It is deboned making it far more manageable, a puppet king one could say.  For my first attempt at a prosciutto, small and manageable seemed appropriate (and less wasteful if it all goes to heck). 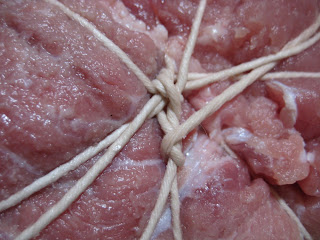 I trotted up to my butcher, where I originally heard about culatello, to pick up my delightful little rump. They even managed to bring in a bladder for me, and a mighty big bladder it is.  Once I arrived home I unwrapped my meat to find it tied beautifully, unfortunately, I had to cut it apart because the skin was still attached and Ruhlman clearly says in his new book Salumi the meat should be skinless.

Just to brag for a moment, I am getting darn good at skinning pig meat.  The key is a sharp knife and a watchful eye.  You can see my directions here.

Once the meat hunk was skinned, I tied it back up in a rather unartful fashion.  But it was my first time and your first time is always a bit sloppy.  Once it was tied, I took several large handfuls of salt and coated the meat, massaging it in.  Then into the fridge it went for just over a week. 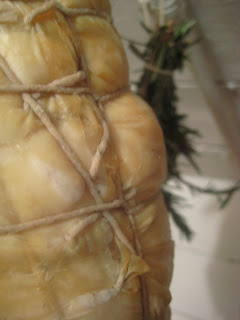 After a week and a quick bath in some white wine, it was ready for wrapping and hanging.  I soaked my pig bladder in hot water for several hours until it was nice and soft.  Then I cut it open, slipped the meat hunk inside and sewed it up.

Funny story.  I needed a trussing needle and yelled downstairs to my mom (it's Christmas, I'm at the 'rents and that's where I'm hanging my culatello) to see if she had one.  She did.  But it was my late Grandpa's.  For some reason, while he was in his old folks home he asked my mom to bring him a large needle.  What did he use it for?  None of us know...

Anyways, to tie the culatello, make several loops around it lengthwise and then twist twine horizontally through the loops.  Think of it as a net for your meat.  I hung mine in a cleaned out storage closet in my parents basement.  There is also rosemary, thyme and lavender hanging so my culatello feels like it is in Italy.

My parents live in North Vancouver and our climate is Coastal Rainforest meaning the air is quite humid so I am just going to leave the space as is with no extra sources of moisture.

Check back in six months when it should be ready.

The process is fun...  What will it taste like?

Shonagh explores the guts of food in An Offal Experiment.
Posted by Unknown at 6:33 AM