When I returned home to Vancouver from Ecuador, fall was in full swing.  As those who live on the Northern Wet Coast know, this means rain and chilliness.  I don't mind either because they inspire cooking and nesting - two of my favorite activities. 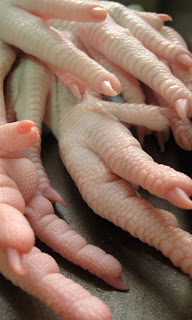 I was contemplating the cooking portion of this equation one night and decided to take some inspiration from Ecuador, and make a chicken foot soup.  As I mentioned in a previous post, Juan, the owner of the farm, loves chicken feet.  I've never actually eaten a chickens foot and decided that if he loved them that much, I should really see what they're all about.

Chicken feet are my new favorite thing (I know, besides all of my other favorite things).  But seriously, they are a forgotten little piece of offal and I will forget you no more little feet.  The feet themselves are full of soft tendon and delicate chicken skin.  The experience of eating them is fun, with lots of sucking on bones and pulling joints apart.  And the texture, the texture.  The broth of your soup will be silky and luscious if you add just one chicken foot, let alone thirteen like mine had.

And my thrifty Scottish side:  This recipe made her happy.  Only $1.36 for the 13 aforementioned chicken feet.  Damn that is a deal.

I also decided to try another veggie that I discovered in Ecuador - a yuca root.  I'd seen these brown roots in the grocery store up here but never tried one.  Why?  I'm not sure as I am usually very adventurous.  It might be its color and potato-like character, not a big fan of starchy veggies.  But yuca, especially in soup, is also quite delicious and has a wonderful texture.  So here is my Chicken Foot Soup recipe, a great way to warm up on a cold fall night. 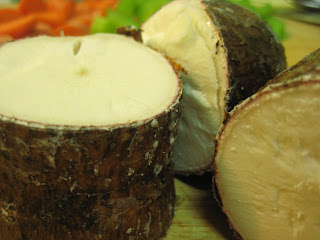 1) Turn your oven on to 375 degrees and pop your chicken feet into a roasting pan.  Roast until golden, approximately 45 minutes.  The roasting is to help develop the flavour of the soup once the feet are added.

2) As your feet are roasting, heat up a tablespoon of cooking oil in a heavy bottomed pot (your soup pot), cube the onion and saute until translucent.  Add the bay leaves, the boullion cube, the roasted feet and enough water to cover.  Let simmer for twenty minutes.

3) While the broth simmers, cut the hard outer layer off the yuca and cut into similar-sized pieces.  There is a woody string that runs down the centre of the yuca.  If you can take that out then do so, but actually it has a nice effect of slowing down the eating process as you enjoy your soup. 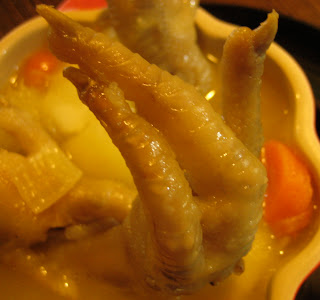 Side note: In the West (and I am guilty) we often equate efficiency with goodness.  Remove the bones, take out the bay leaves, anything inedible should not be on the plate.  While this definitely makes eating easier, I think it can, at times, reduce the pleasure of slowly and mindfully picking through a meal.  Eating chicken foot soup is an exercise in patience (and greasy fingers) and I found that having to slow down and pull the woody yuca core out of my mouth really added to the mindfulness of the meal.  Just a thought.

4) Approximately half an hour away from dinner time, add the yuca chunks.  They turn translucent when cooked so are kind of like a built-in veggie timer.  After the yuca have cooked for approximately 15 minutes, add the carrots and then after 5 minutes add the celery.  Turn the temperature to low-medium, put a lid on and let the whole mess bubble away until it is time for dinner or the yuca are translucent.

5) Before serving, adjust for seasoning.  I like to add a couple squirts of hot sauce for good measure.

Deliciously unctuous from the cartilageouness of the chicken feet.  Other than that?  As delicious as only a bowl of homemade chicken soup can be!

Shonagh explores the guts of food in An Offal Experiment.
Posted by Unknown at 5:06 PM