My trip back to Quito involved another harrowing journey on the bus.  This time going up a mountain. As is obvious I survived the trip, much to my relief.  With three days in Quito until flying home, I decided to really dive into the food culture.  This desire was made easier with the discovery of the most amazing place ever, a food paradise of food paradises, Mercado Central. 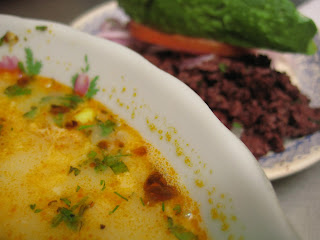 So my blog is called An Offal Experiment and one of my goals is to develop a taste for offal.  Let me just say that my experience at Mercado Central moved me much closer to my goal with the help of a beautiful young Andean woman and a classic case of mistranslation.

I had read that Ecuadorians make a tripe soup much like the Mexican soup menudo.  Hearing that Mercado Central was the place to go for this soup I ventured in and ordered a bowl from the aforementioned beautiful young Andean woman. I quickly learned that menudo in Ecuador is not the same as menudo in Mexico.  Menudo in Ecuador is every possible bit of chicken offal that can be stuffed into a bowl.  It is heart, liver, intestine, I think windpipe, thymus gland, and probably spleen topped with cabbage and mint stuffed into a casing that is too tough to even bite through. 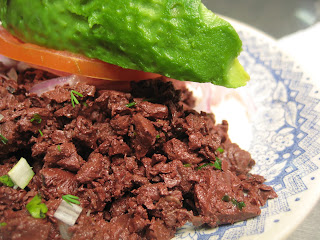 Yes.  This is what I ordered.  And this is what I ate.  Because my parents raised me to be polite and I would never dream of insulting that lovely Andean woman.  It was so strange for Ecuadorians to see an obvious foreigner (I am very, very pale) sitting in this little booth eating menudo that as I finished and was leaving, one man looked at me and quizzically asked, "muy rico?" which meant "Very delicious?" or "Did you actually like that?"  To which I of course responded, "Muy rico!" or "I freakin' loved it."

As I walked out of Mercado Central, I'll admit to patting myself on the back quite a bit and then drowning the memory of the soup with a pastry.  The soup was quite good and the taste of various organs fairly mild, but it was heaped with organ meat, an almost unbearable amount for someone who doesn't really like offal.

Clearly, however, I'm a glutton for punishment because I went back to Mercado Central later that day.  This time though I got a much safer meal with chorizo and potato pancakes and avocado.  The chorizo was delicious with a deep, rich taste.  It obviously had a bit of organ meat in it as well but the rich flavour was tempered with the spicing.

I also returned to Mercado Central the day after.  What can I say I loved the place!  This time I again ventured into organ meat territory with a soup called Yuarlocro.  This is a chicken soup again with bits of organ meat and then blood sausage on the side.  The pictures above are the Yuarlocro.  The organ meat in the soup was much subtler and I found the blood sausage quite tasty if quite bloody tasting.  The key with the sausage was to eat it in small amounts mixed with the avocado and the red onion - almost like a blood sausage side salad!  Mmmmmmm... 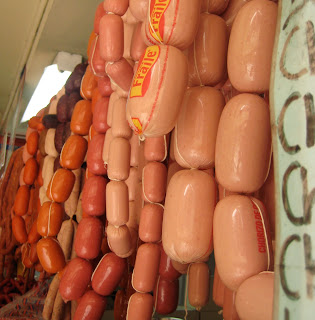 Mercado Central illustrates the difference between the modern industrial diet and the food found in poorer or more adventurous food countries.  In Canada there is a movement towards eating the "whole hog" but you won't find an entire food court devoted to various organ meats.  It just doesn't happen - the Canadian palate is not developed enough for that.  Call it a result of privilege or whatever, I loved seeing all the people slurping down interesting bits of meat.

But Mercado Central is not simply limited to organ meat.  Juices abound, fresh vegetables, fresh fruits, dried goods, fresh flowers, fresh herbs, chicken parts, butchers, fish mongers.  It was seriously my idea of heaven and as soon as I would leave I wanted to return again. 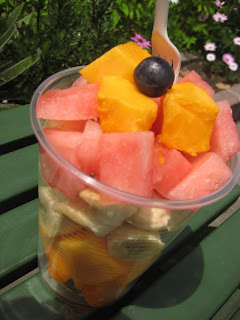 The rest of my time in Quito was spent hunting down my food favorites.  These included:

Ah!  What a wonderful trip full of food and beauty and amazing people.  I truly loved going to Ecuador and trying to get to know the culture in just a few short weeks.  It gave me a taste of Latin America and I can't wait to go back for more.

Shonagh explores the guts of food in An Offal Experiment.
Posted by Unknown at 4:28 PM