The Food of Canoa

A description of my trip to the farm in Canoa would not be complete without describing the food that Mami made.  As part of the cost of staying at the farm, I was provided with three meals a day, eaten with the family.  Normally I cook for myself so it was an absolute luxury to have someone else cooking for me everyday.  I just loved rolling into the house in the morning with fresh cheese and buns waiting for me, a beautiful big bowl of fruit salad sitting there and double-fried bananas sizzling away on the stovetop. 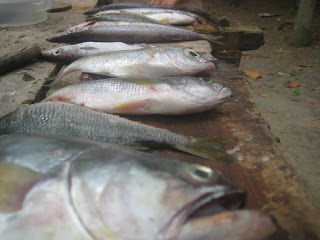 This is by no means an exhaustive account of all the food I ate in Canoa.  Mami made a lot of different foods.  These are just some of my favorites.

Canoa is a seaside town, and though the farm itself is about 10 kilometres away from the shore, it was a quick trip into town to pick up fresh fish.

There were a ton of fish types that I had never seen before and my favorite way of eating them was when Mami fried them whole.  A fresh whole fried fish is just so tasty with just a little salt and maybe a squirt of lemon or lime. 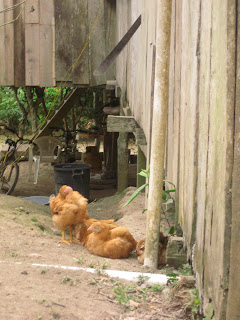 Every Sunday, a chicken was killed and made into a delicious potato and chicken stew.  I don't know what spices Mami and Juan's sister used but I would guess there was cilantro as that was quite common.  I might also guess cilantro root but don't quote me on that.

For those who read my original post on going to the Amazon, please note that I didn't kill a chicken.  Juan's sister was just so damn fast that I didn't get the chance even to offer my help. It's like I would go to the bathroom and by the time I got out the chicken would be dead and half-plucked!  My goodness.

Papi was quite proud of the chickens.  He told me that they are a special variety called criojo (spelling?) and are very tasty.  I will say that the chicken soup was quite good.

Juan and I had an interesting conversation about how Westerners generally like their food sanitized and Ecuadorians don't.  He had a big chicken foot poking out of his soup and he was telling me how much he loved it, that it was his favorite part.  I was saying that unless you are eating at an Asian restaurant in Vancouver, you rarely find chicken feet.  This amazed him! 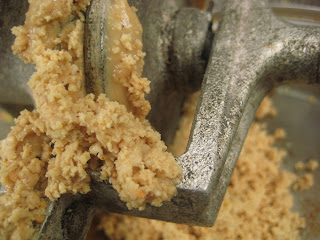 Another thing they grow on the farm is peanuts and one day Juan roasted and ground fresh peanut butter.  I only got a little taste (mixed with a little freshly ground chocolate) but it was definitely the most delicious peanut butter I've ever eaten.

One meal that I didn't get a picture of but that was my favorite was crab-fried rice and beef tendon soup.  Mami had all these tiny crabs from town that she made the most amazing stock from flavoured again with some kind of spice that hinted at curry but that I just couldn't place.  It was the best fried rice I've ever eaten.  The beef tendon was put in a pressure cooker and came out decadently soft.  I absolutely adore beef tendon and am going to make this soup for my parents now that I'm home.  The texture of the tendon was just so luscious and the broth had the subtle taste of onion and cilantro.  It was amazing!  And she also introduced me to the vanilla-infused sour mandarin juice at this meal so it was like I had never eaten before.  Everything was just so delicious. 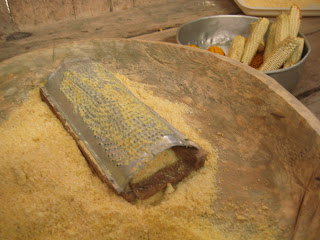 The last meal that they served me was "tortillas" but they were unlike any tortilla I have ever had.  When I think of a tortilla, I think of flat corn wraps.  These tortillas were more like a muffin and were stuffed with fresh cheese.

Papi spent at least an hour grating dried corn into this giant wooden bowl and then Mami spent what felt like the entire day kneading and mixing and forming.  Once the cakes were ready they were put into a big metal pot and out onto the fire pit.  A piece of sheet metal was put on top and then a burning log was put on that.  It was an old school oven to be sure but the flavour of the tortillas was amazing.  What a treat! 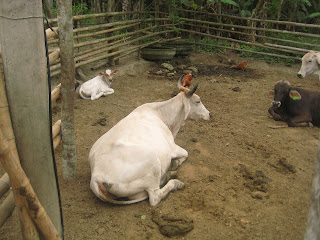 It would not be right to finish a description of food on the farm without mentioning the delicious cheese from across the street.

The cows would be milked and cheese was made and pressed right away.  From recipes that I've found online the whole process takes about seven hours, and the outcome is so yummy.  We would eat the fresh cheese on toasted buns or on top of the double-fried bananas or plantains.  It was also stuffed into plantain dumplings and cooked in soup.  Cheese...

A couple days after I arrived, one of the little girls and I walked over to the neighbor's house to pick up some cheese and because I was a guest she had to feed me.  The slab, and yes I mean slab, of cheese she fed me was something to see.  It was the size of a typical chunk of cheese you would buy in the grocery store.  Huge!  What wonderful hospitality and of course I needed to eat it all so that she wouldn't feel insulted.

My experience on the farm was just lovely.  Despite my limited Spanish, I really felt like I got to know the family by the end of my stay.  They stuffed me with food, the girls overwhelmed me with hugs, and Juan kept me laughing for most of the day.  We both found out that you don't need to speak the same language to make fun of each other.

I hope to make it back in a couple of years to roam the cacao trees, eat the fresh bananas, and enjoy the company of the wonderful Estancia family.

Shonagh explores the guts of food in An Offal Experiment.
Posted by Unknown at 5:28 PM