I am a coffee fanatic.  Some would call me an addict.  I am known to not want to interact with the world until I've had my two morning coffees.  An appreciation for a good cup of coffee goes hand in hand with my addiction and so the chance to roast and grind my own coffee was a prospect that excited me terribly. 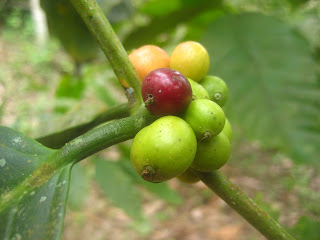 Besides growing cacao and citrus fruits, Juan and his parents also grow coffee.  Mmmmm, coffee.  The berries are a beautiful bright green and ripen to a dark red.  As you can imagine from my post on cacao, all of the colors in their food forest are stunning.

Once the beans are ripe, they are laid out in the sun to dry, until they turn a dark brown on the outside.  The bean on the inside is a light green and splits down the middle into two halves.  What we traditionally think of as the coffee bean is half of this bean. 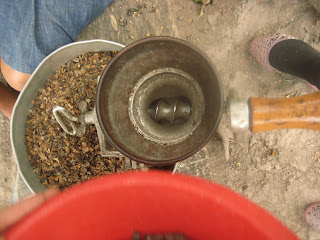 After the beans are dry they are put through the same mill that was used in the chocolate making at a very loose setting.  This is to separate the beans from the hull without breaking the bean itself.  Once the beans are milled though, you are left with a big bucket full of beans and chaff.

This is where Mami stepped in.  She scooped up a big handful of beans and held it high in the air, pouring the beans into a bowl waiting below.  As the beans dropped, the wind blew the chaff away, leaving just the green beans behind.  It was amazing how well this worked.  She and I then picked through the beans to remove any remaining chaff. 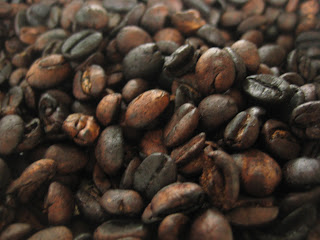 With the beans separated, it was time for the roasting.  Mami first rinsed the beans in water and then put them into a large pot over high heat.  It was then my job to stir, and stir, and stir - to bring the beans from green to a golden brown without burning them.  This meant relentless stirring for at least an hour with Mami tutting over me saying, "Ne cancelar", which means, "Don't stop" in Spanish.  She finally took over when I got quite tired.

It was fun watching her stir the beans because you could tell how practiced she was, how she must have done this hundreds if not thousands of times.  And finally, the beans were ready. 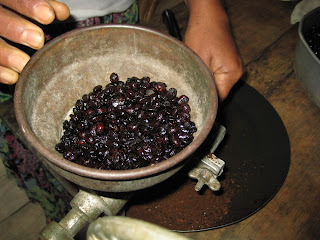 Once they reached a dark brown, she took them off the heat and I started to stir again as she set up the food mill one more time.  Into the hopper the beans went and this time we called on the two little girls to muscle through the coffee beans.  Of course they were such balls of energy that more coffee was getting on the ground than on the pan so I quickly took over.

The smell of the freshly roasted and ground beans was amazing.

The next day Juan treated us all to cappuccinos.  He got fresh milk from the neighbour across the street, and heated it up gently in a sauce pan. 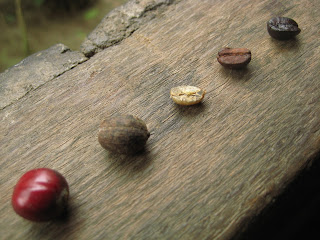 While the milk was heating, he poured boiling water into a tin can full of ground coffee, letting the dark liquid seep out of the drilled holes in the bottom.  Spoonfulls of coffee were added to the heated milk and then each cup was topped with a dollop of whipping cream and a generous sprinkling of canela.

As I drank I noticed golden fat droplets forming on the surface of the milk.  It was so rich and delicious that all I could do was sit and sip.  Oh my goodness that is a coffee that I will never forget.

It also made me question my relationship with coffee, my treating it like a drug, and the careless abandon with which I consume it.  To know that there is this lovely family in Ecuador who go through this process to create a cup makes me realize how little I actually appreciate coffee.  How I mindlessly scoop my grinds into my little french press, impatiently waiting for my morning hit.

I don't know how this experience will change my relationship, maybe I'll drink less, or drink with more care or drink with a greater appreciation?  I look forward to finding out.

Shonagh explores the guts of food in An Offal Experiment.
Posted by Unknown at 4:28 PM