The Frutas (y Jugos) of Canoa 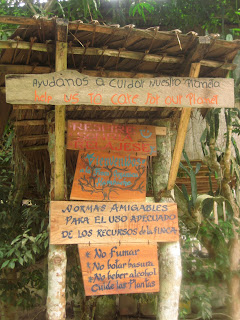 The journey from Quito to Canoa was harrowing.  For those who haven't been to Ecuador, the drivers are pretty crazy.  They drive fast and the rules of the road are taken as more of a guideline than anything else.  For example, you really only need to stop at a red light if there are other cars around, otherwise, honk and speed on through.  I found the driving style quite humourous until I realized that my bus driver to Canoa also drove in a similar manner - hurtling down 3000 metres of hair-pin turns in the pitch-black night.  Trust me, all you can do is pray and try to sleep through it.

Once I arrived in Canoa at 5:00 in the morning, I was met by Juan, the owner of the farm.  He strapped my giant backpack to his motorbike, I clung to him and we sped off down a dirt road.  Needless to say the whole trip to the farm was a bit of an out of body experience.

When I got to the actual farm, the whole family greeted me!  His parents, who also live there and work the land, his sister, her husband and two kids, as well as Juan's wife and four children.  It was a full house. 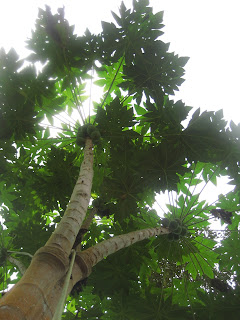 There is so much to say about the farm and my experience there but because my blog is focused on food, that is where my focus shall stay.

One of the most amazing parts of living on the farm was the beautiful fruit growing all over the place.  This was the first time that I've ever seen a little pineapple growing out of a pineapple tree, a giant tree full of papayas (right) and citrus trees heavy with limes, lemons, pomelos and mandarins.  It really was heavenly.

Juices, or jugos in Spanish, play a huge role in the Ecuadorian diet.  Juice accompanies every meal and it is always made fresh from the produce found on the farm.  In the morning Juan would blend up fresh papaya with pineapple or mandarins or watermelons.  His mom (Mami), though, made my absolute, absolute favorite juice: a vanilla-infused sour mandarin lemonade.  Let me explain.

The farm is in an ecological niche called a cloud forest.  This means that the air is generally moisture-laden and foggy with not a lot of sunlight.  I think this was especially true for the time of year that I was there - a wetter season.  Because of the lack of sunlight, the mandarins had a hard time ripening and tended to be very sour.  It was in this sour state that Mami made the ultimately delicious sour mandarin drink. 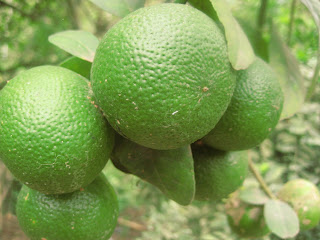 She combined fresh sour mandarins with whatever lemons were on hand, added sugar and water to taste and then vanilla essence.  Oh my goodness I don't know why I've never thought to add vanilla to my lemonade before???  When I make perfume with lemon or orange I use vanilla because they smell delicious together, and now I know that they taste delicious together as well.  This juice was so freakin' good.  I don't know how I'll emulate it but I am definitely going to be trying.

There was also a lot of fruit eaten whole or out of hand.  The property had banana trees everywhere and just outside the kitchen door hung a branch of bananas.  These bananas were absolutely delicious.  While of course the taste was similar to a store-bought banana, they had a much subtler, complex sweetness. 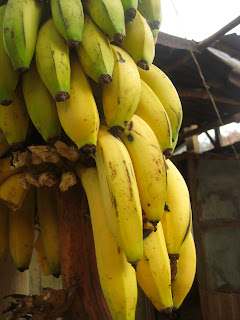 Bananas were used for lots of different things.  If the bananas were ripe then they were eaten fresh or cut up into fruit salads. When they were green, Mami double-fried them for breakfast. Oh my goodness I love double-fried green bananas.  They are a bit like a hash brown and are a great way to get some complex carbohydrates into your body first thing in the morning.

Another common snacking fruit were the pomelos.  A pomelo is similar to a grapefruit, but is much less sour and much more giant.  The little girls (there were two on the farm with me) would grab a giant piece of bamboo that had one end sharpened to a point and hit at the fruit until one came tumbling down.  Using a giant machete, they would cut it open for me and we would suck the juicy parts out of the thick pulp.  What a fabulous treat after you've been sweating it out on the farm.

Another equally delicious fruit treat the girls shared with me were guava seeds (below).  On the path up to the farm was a neighbor's property where they grew guavas.  The girls and I would climb through razor wire fences and nab a few pods. 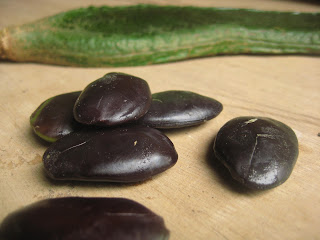 The pods were about two feet long and once they were opened, the seeds could be pulled out and the sweet pulp sucked off.  Imagine orange pulp but juicier with a floral sweetness.  I was addicted and also kept the beautiful black seeds once I was finished snacking.  I am thinking about turning them into earrings, an idea that the girls found hilarious.  Everything we ate after I shared my earring idea was contemplated as possible jewelry.  The cocoa pods were to die for but turned brown after I dried them.  Darn.

The fruit was truly unforgettable.  I would often wander through the forest, just marvelling at the colors, the smells, the abundance.

Up next: The beautiful cocoa pods growing amidst the fruit trees leads to a lesson in making chocolate from bean to ball.

Shonagh explores the guts of food in An Offal Experiment.
Posted by Unknown at 3:19 PM