For my first recipe out of Odd Bits, I decided to bust it open, literally.

The author, Jennifer Mclagan, mentioned that a sheep's head was quite fiercesome looking.  When my butcher brought it out from the back, held right about head level, I'll admit that it looked quite hideous.  The eyeballs bulged from the naked flesh, teeth bared, tongue limp having fallen through the bottom of the jaw.  He wrapped it up gently so the eyeballs didn't break - a sheep's head with a broken eyeball could be even more gruesome if it were possible - threw in a couple pig's feet and off I walked home. 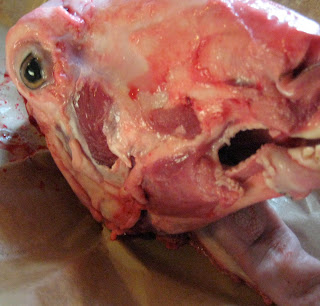 Once I unwrapped it I realized that the brain had not been removed.  Pleased, I opened up my Odd Bits recipe book to find something yummy to make.  Sheep brain fritters it was (page 42), and here is my story.

1) The first step obviously is to get the brain out.  This is no easy task and not for the faint of heart.  I pulled out my trusty hacksaw and sawed the skull open where it seemed thinnest.  I also aimed to the edges of the brain so that when my saw broke through it would do little damage to the brain itself. 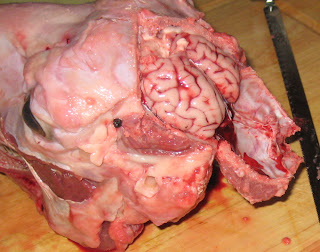 The key to getting the brain out of the skull unharmed is to think about where it attaches to head.  On the side closest to the back you will find the brain stem.  The brain stem is attached to the spinal cord so if you gently grab the brain and pull from the stem then it should come out easily.  Don't use too much pressure and if there is someone in your household with small hands try to cajole them into the task.  Don't be surprised if it's a hard sell. 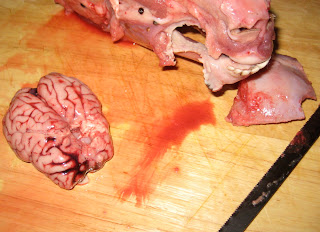 Here is my lovely little brain.  If you look at the lower right corner of the brain you might see a white area.  That seems to be where the sheep or lamb had their head drilled.  I am not sure why this happened but if you notice any damage to the skull then be sure to check the brain for skull fragments.  I found several large chunks.  No one wants to eat sheep skull.

2) Once this first task is over give yourself a little pat on the back for a job done.  Then steel up your courage (and maybe stomach) and move on to brain prep!  If you are serious about getting to know offal then I would recommend purchasing Julia's book, which is chock full of recipes and preparation tips.  However, in essence what you are doing now is getting the brain ready to cook.  This starts with soaking the brains in salted water from six hours to overnight.  Soaking helps get rid of the remaining blood.  Once the brain is soaked, split it open and check for more skull fragments. 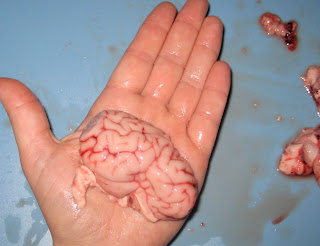 Look at how tiny this brain is!  It's pretty cute.  Once the brain is soaked and split it is time to attempt to peel off the outer membrane.  I couldn't get my membrane off without seriously desecrating my little brain so I opted to leave it on.  The recipe I am using calls for coating and then frying the brain so it doesn't really matter if the membrane is on or off.  Now the brain is ready for poaching. 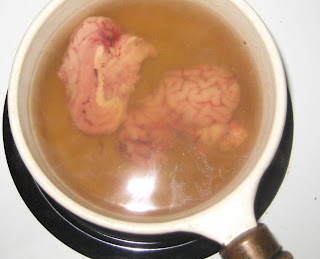 I used a broth similar to the one described in Odd Bits (page 21).  Basically I threw in a whole bunch of spices, simmered it for a while and then strained it.  I poached my brain in this broth for about five minutes because it was quite small.  The brain should firm up when you poach it, but it will still be quite soft.  The softness is the beauty of the brain.

Once it is poached you can either use it right away in a recipe or cool it and store it in the cooled broth for several days.  I recommend using it right away because who wants to eat brain that is a few days old?

3) Whoo!  On to actually cooking this luscious little pile of wobbling grey matter!  The lobes, now of a decent firmness need to be sliced approximately half-an-inch thick. 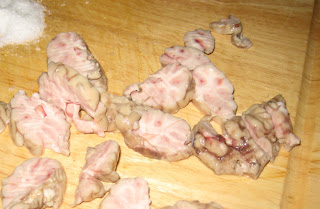 The brain slices are then coated in a cheese, egg and chive mixture (see ingredients below) and fried until golden brown.  Specific directions are taken from Odd Bits with permission from the author. 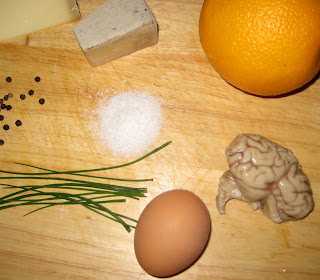 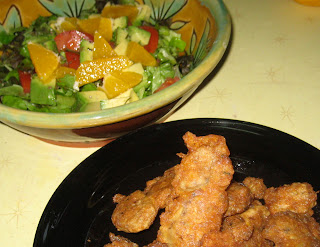 I paired my brain fritters with a light salad - green lettuce, tomato, avocado, orange segments, olive oil and a splash of white wine vinegar.  I enjoyed the salad tremendously.

The brain.  Oh the brain.  Did I love it?  Honestly.  No.  I didn't love it.  It was okay.  I almost ate the entire brain so that's pretty good for a first timer.  I didn't taste much cheese so that didn't help.  I also found that the batter didn't get crispy enough.  If I were going to try again I would mix it up a bit, maybe more salt, something spicy?  Maybe jalapeno poppers stuffed with brain?  That might be nice.  The texture was beautiful and silky but there was a distinct flavour that I am going to have to allow to grow on me.