So with my wild yeast experiment underway and my first colony ripe for baking I decided to fire off my first loaf of bread!  I've been known to bake my own bread quite regularly but I've never attempted to do it with my own yeast.  Here goes nothing...

I should mention before I start that following directions is just not my forte.  I prefer to cobble together and improvise.  While this does mean that I meet with failure regularly I also feel it teaches me to troubleshoot well and think critically about what I'm doing.  So here is my cobbled together process...

I started with a recipe for authentic San Francisco Sourdough.  However, I wanted to make whole wheat bread because I can't eat white bread.  It just seems wrong to me, so I switched all of the flour to whole wheat with the exception of one cup.

1. I used my rye monster because it was the first one ready.  So, according to the recipe, I mixed a cup of flour with a cup of my monster and some water and let it sit out for 6 hours at room temperature.  At this point I had a crisis of faith (sorry wild monster) and decided to put a teaspoon of bread yeast in with my culture for good measure.  I knew the whole wheat flour would be hard for my wild yeast to raise and I didn't want to end up with a rock hard, inedible loaf.  I added the instant yeast with about half an hour to go so it had a chance to get in there and do its magic. 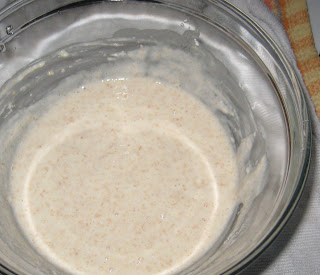 2. Once the culture had proofed (proven itself to be active that is), I added the rest of the ingredients.  A tip I heard recently to help disperse the salt was to add the salt to the water so it spreads throughout the loaf.  Then the fun began!  This baby needed about 25 minutes of kneading.  In retrospect I wish I had kneaded it for longer.  The dough should be soft and pliable when you are finished and frankly whole wheat flour needs a little more love than white flour.  It should be nice and stretchy.  Then it needs to rise for 10-12 hours.  Holy cow did I mention that I don't read instructions.  I had to get up at 2:30 in the freakin' morning to punch down my dough and give it a little massage.  At this point, I put it in a bamboo steaming basket for the final rise of between 2-4 hours. 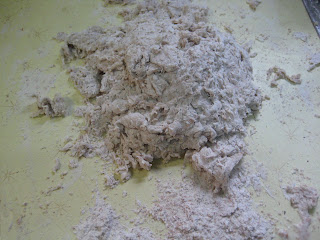 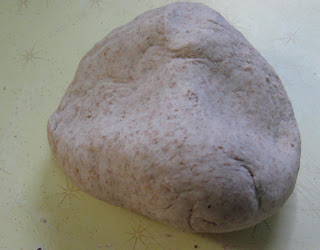 3. Once it had risen for the second time, I tipped it out of the basket onto a pizza sheet, slashed it a couple times and it was ready for the oven.  I baked it at 425 degrees for 15 minutes and then turned it down to 375 for the rest of the time.  To get the oven nice and steamy, I put an empty pan in the bottom of the oven as it heated and then poured some hot water in right before throwing the loaf in.  I also threw a few tablespoons of water against the sides of the oven during the first 15 minutes.  Yeah talk about a fun early morning activity, dancing around the kitchen trying not to get steam burns.  The loaf needs to be cooked until the internal temperature reaches 190 degrees or until the bottom makes a hollow sound when tapped.  The hollow sound results from a low moisture content on the interior of the loaf and this helps keep the crust crusty.  If the loaf is too wet inside then the moisture migrates out and make the whole thing soggy.  In the future I am going to increase the bake time a bit and brush it with some kind of fat to make it brown up a bit more. 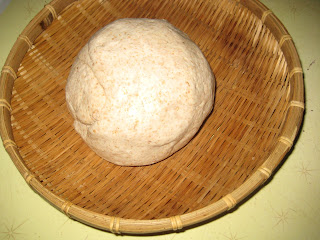 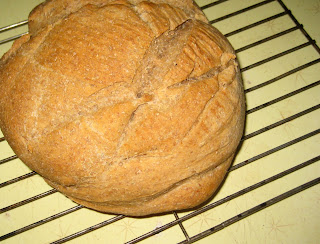 My first attempt at using the wild yeast was quite successful. I will try not to use any commercial yeast next time... 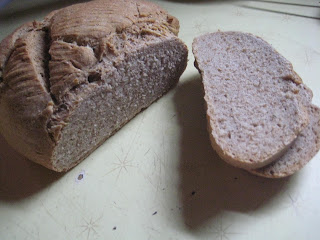 Notes:
That's it for now!  Up next is the honey monster!