I was walking home from school today contemplating breakfast.  I often contemplate breakfast because it is my most favorite meal.  As I contemplated I remembered the hunk of pancetta in my fridge.  I've been wanting to make something resembling bacon jam for a while and it seemed like a really good way to use up the last of my pancetta.  Rather than follow a recipe, I decided to make one up.  I've made chutney before so let's see if that holds me in good stead.

1) Cube the pancetta.  Keep the pieces small, maybe a 1/4 of an inch.  They shouldn't be too small though because they will shrink as they render.  Put the pancetta cubes into a sauce pan on just below medium, lowering the heat as the fat renders out.  Pour out the excess fat periodically.  Once the majority of the fat has melted out and has been poured out of the saucepan, take out half of the pancetta cubes and set them aside. 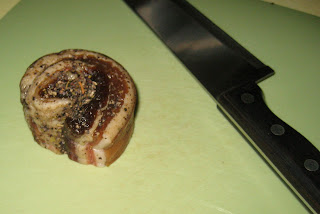 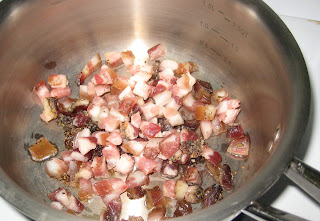 2) As the pancetta is rendering, dice the apple with the peel on.  You can remove the peel if you would like but I enjoy the added texture.  Toss the apple cubes in the white wine vinegar to prevent them from browning while the pancetta cooks.  When the pancetta is ready, throw the apples in as well as the rest of the ingredients.  Cook on medium heat until the apples have almost turned into apple sauce and you like the consistency. 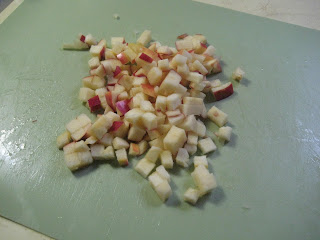 3) Add the remaining pancetta just before serving and stir well to combine.  This gives the chutney a bit of texture. 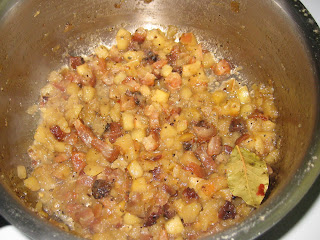 Notes:
I dug into my chutney so quickly that I forgot to take a picture of it once it was completely finished.  That is what I call proof positive of success!
Posted by Unknown at 8:03 PM