My little bro told me about making my own yoghurt half a year ago.  He said it was super easy and I finally got around to actually checking out some recipes.  Let me tell you, for those interested in learning how to make cheese, yoghurt is a great first step.  You really can't screw it up!  Well...  I have a couple of times but you won't because I'm going to explain the rationale behind each step so you won't be tempted to skip any!

First though, where did yoghurt come from?  According to my good friend Wikipedia, the word yoghurt comes from the Turkish word: yogurt! (go figure) which means "to thicken."  Much like yeast, yoghurt is an ancient food and archeological evidence places it as far back as 2000 BCE (possibly, no reference).  These early yoghurts are said to have fermented because of the bacteria found in the goat skin bags that stored the milk.  I am sure that this early yoghurt had a much "earthier" taste than our modern sanitized version!  Yoghurt moved to this side of the pond early in the 20th century, and, according to the article, was popularized by none other than Mr. Kellogg.

I am a yoghurt fanatic.  It is just chock full of healthy bacteria, protein and calcium.  The International Journal of Obesity (January 11, 2005) has found a correlation between consuming yoghurt and losing weight!  What is not to like about this stuff?  Even better, if you make it yourself, it is dirt cheap.  Trust me if you are buying yoghurt in a store, you are paying too much!


Yoghurt bought in the store costs approximately $1.33 a cup, but if you make it at home, it only costs $0.13 a cup.  That is 90% less and it is pure, pure, pure!  My Scottish thrifty side just loves this math!  Another reason my yoghurt is so cheap is that I buy milk close to expiry.  My local Buy-Low foods sells 4-litre jugs for 50% off when they are a few days away from expiry.  Making yoghurt is the perfect use for this milk and is what takes the cost down to $2.00 for 4L of milk!  I use non-fat, you can use whichever milk you like.  Yay for yoghurt!

A big pot
A wooden spoon
A thermometer
A few tbsp of plain yoghurt (depends on how much milk you are using, more milk then more yoghurt)
Milk (as much yoghurt as you want to make)

1. Pour the milk into your pot and clip the thermometer on the edge so that it is suspended in the milk rather than touching the side or the bottom of the pot.  This is to get an accurate read of the temperature.  Some recipes call for a double boiler.  I don't do this.  Instead I stir it every few minutes and I use a lower heat.  The goal is to bring your milk up to 172 degrees fahrenheit in order to denature the milk proteins.  This allows the milk to clump together properly once it has been cooled and seeded with the premade yoghurt.  The heat should be just below medium and the whole process will take a while (approximately 45 minutes).  For the most part it is just a waiting game so put it on when you have something else to occupy your time.  If you want to heat it up faster, then please be my guest, but I can guarantee that once you have spent several days trying to scrub burnt milk off the bottom of your pot you will revert to the lower, slower heat. 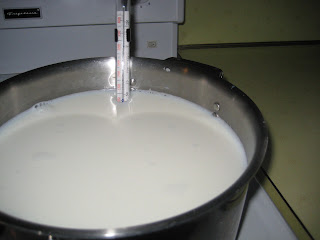 2. Once your yoghurt has reached the appropriate temperature, it is time to cool it down.  I find the water bath method is the quickest.  Basically, I just fill my sink up with cold water and ice packs and put a cooling rack on the bottom.  I pop the pot straight in and it is usually ready in about ten minutes.  You want to take it down to 110 degrees fahrenheit and then pull it out of the water.  Once it starts getting close I check it frequently so it doesn't get too cool.  At this point add your premade yoghurt (it's called seeding your milk).  When I am making 4 litres of yoghurt I add about a cup of "starter" yoghurt.  It might be overkill to put that much starter in but I have found that if I put too little in then the yoghurt doesn't thicken up very well.  Stir the starter yoghurt in vigorously and then put a lid on your pot. 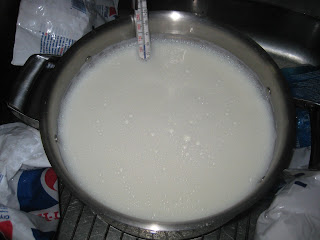 3.  It's now necessary to find a nice warm spot so the bacteria can work its magic.  I put my pot onto one of those electric plate warmers (thanks for that Gramps!) and then swaddle it with towels.  It needs to stay nice and warm or the bacteria aren't going to be happy.  Once you have set up a home for your pot leave it to settle in for at least 8 hours.  Then, that magic moment!  Open up your pot and you will find beautiful yoghurt!  I like to stir it, put it into tupperwares and then fill up my fridge.  It lasts for two to three weeks. 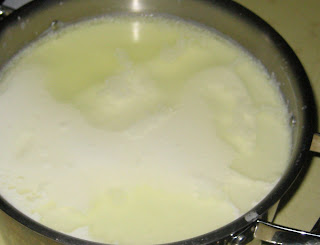