Okay, okay, okay.  There is no meat involved in my baby shower so it shouldn't really qualify for a blog entry.  However, food is about nourishment and love and I love hosting baby showers.  So, that's my reasoning.  I know it doesn't really make sense.

The star of the party has a mixed background - half black, half white.  She moved to Ghana several years ago, married a Ghanaian man and now has a lovely child with him - Yaw Nketia.  To honor her background as well as her future and to set an intention for her new little babe I decided to mix Africa with Britain.  Here is my result. 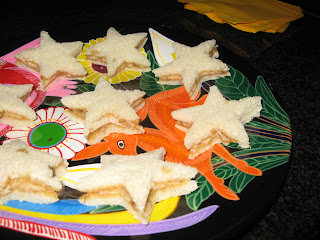 A classic baby shower item is fancy sandwiches.  My late grandmother specialized in them and that is where I took my inspiration.  Bananas and peanuts are classic Ghana with a thinly sliced white bread bringing the British in.  I used a star shape - the theme of the party - because it symbolizes black pride and is found on the Ghanaian flag. 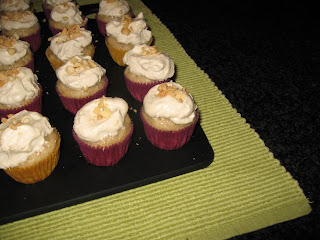 Next up is an Accra banana peanut cake topped with whipped cream flavoured with cinnamon spiced butterscotch and topped with chopped peanuts.  Butterscotch is really easy to make.  All you do is melt some sugar - in this case I used brown, maybe half a cup, with a little water to help it melt evenly.  Once the sugar is melted add a few tablespoons of butter and let it cook at a high heat for a while (10 minutes or so).  It will probably darken a little bit more but be careful not to let it burn.  Take it off the heat for 10-15 seconds and then add whipped cream, about 30 ml, and beat until blended.  If you want to flavour the butterscotch add spices during the sugar melting phase.  Yummy! 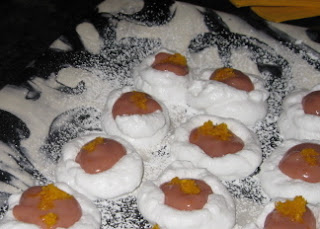 Tiny little meringue nests with blood orange curd in the centre and topped with orange zest.  The new mom loves pavlova and I thought the orange added a bright African twist.

I used the meringue recipe exactly as the recipe instructed and they turned out perfectly.  My little nests were about an inch and a half across.  To make them, pipe a mound of meringue approximately the size of a ping pong ball.  Using two little spoons, press the mound down and out in the centre to create a little nest.  I baked these meringues at 200 F for several hours and then let them sit in the oven with the heat turned off.  You want them crispy but still white.

The curd is traditionally lemon but I thought blood orange would be fun.  Follow the recipe but substitute blood orange juice (freshly squeezed) for the lemon juice.  I would also add a squirt of lemon juice for extra tartness and a vanilla bean for richness.  I also definitely recommend putting the curd through a strainer to make it nice and smooth.

I don't think it's a good idea to fill these tiny meringue nests early because they will get too soggy to eat.  That's what happened to mine.  RIP meringue nests.  They were delicious, just a little too soft by the time my guests arrived. 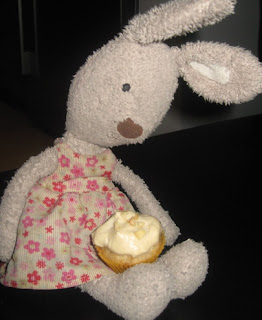 My little cousin gave a mini cupcake to her bunny and I just thought it was the most adorable thing ever!

And finally, date squares...  Another of my girlfriend's favorites.  I followed this recipe pretty closely with a few exceptions.  Another reviewer suggested pre-baking the bottom - good suggestion.  I didn't add any sugar to the date portion but I did cook the dates in orange juice with some dried coconut.  Right at the end I stirred in about a tablespoon of orange zest.  I also added cinnamon to the flour and oat mixture.  I didn't put a picture up because frankly they just looked like date squares.

Banana chips and roasted peanuts rounded out the party.
Posted by Unknown at 9:59 PM