Loafing Around: Nothing but monster...

Well here it goes.  I'm making my first loaf of 100% whole wheat flour using only my homemade wild yeast.  What is going to happen?  I hope it rises and tastes good.  Some might say I have low expectations.  I think that's a good thing early in a relationship and technically tonight is like a first date.

I followed the same recipe from my first loaf but I used more starter, more heat, and less flour.  I think I probably should have been a bit more scientific about the whole mess but I wasn't, that's life.

Here are my changes:
And here's what happened... 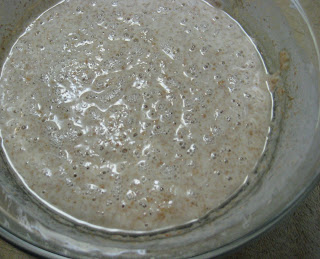 It's looking good!  Nice and bubbly.  I read that the thicker the dough the more the bubbles so I'm going to add less water next time so it gets even more bubbly! 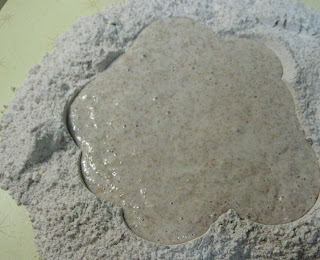 A nice well of bubbly culture and flour... 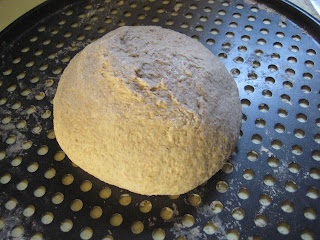 It looks fine right?  Well, don't be fooled.  This is where things started to get a wee bit off course.  I know those little holes in the pan look quite innocent.  You might even think that they are a good thing, making the crust nice and crispy.  Contrary to popular opinion, they act like little black holes, sucking the dough down, and basically baking the bread into the pan.  Yes, into the pan.  I had to cut my lovely loaf off the sheet.  Hmph! 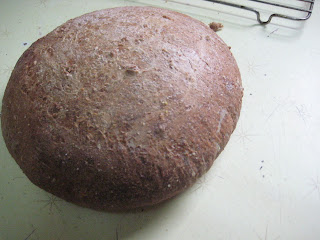 Rescued from the sheet pan!  It turned a lovely color this time, which it was doing on its own but I also brushed a little cream on top close to the end of baking to help it along.

My assessment:  This loaf was a bit on the heavy side.  I'm not going to go so far as to say it could be used as a door stop, but others might.  In retrospect I think the dough was too wet so I am going to adjust accordingly next time.  Also, note to self: Use parchment paper with wet dough!  No more dough black holes!

Also, stay on the lookout for my sourdough donuts.  Anyone who knows me knows that it took me about a day after making my first loaf to google "sourdough donuts" and I found what looks like a pretty yummy recipe.  I'm thinking about injecting some doughnut holes with black pepper rose dulce de leche and then rolling the little beauties in vanilla sugar.  Sounds pretty dangerous for my waist line...