Grandmummy with a Pick Axe

I went over to my cousin's new place the other day to help get her yard in order.  I arrived and walked around back to where the family was gathered.  There was my Grandmummy with a giant shovel turning over the soil in the veggie-garden-to-be, while my two cousins-in-law (men in their 30's) were sanding a bannister.  Hilarious!  I don't know how she got assigned shoveling duty but there it was.  So I jumped in with her and then insisted we snap a pic.  Please note that I am 5'8" so she is rather on the small side. 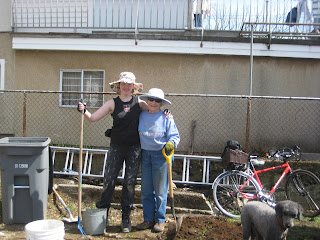 We shovel for several hours and then she decides that the size of the rocks really requires a pick axe.  A pick axe!  I inquired as to whether or not she is a miner and then decide that I need a video clip of her using her pick axe.


I would also like to mention that the thing was heavy.  She lost it momentarily and sent me scurrying around the yard to find it for her and when I found it I did think to myself: This pick axe is freakin' heavy.  I would get tired using it!

As Mother's Day approaches, I just want to say: Grandmummy, you rock!  You give all of the women in our family an ambitious example of life in the later years and I only hope I can live up to it and be an equally ambitious example for my grandkids.