It was time to play around with charcuterie again.  I have been contemplating making more sausage because I'm out, but I'm in the middle of training for the Spartan Sprint so having pound upon pound of delicious sausage tempting me off my strict diet didn't seem logical.  Ditto for three pounds of pork pancetta.

An innocent duck breast?  That's an entirely different story.  It's small.  And duck fat?  Is that ever a bad thing?  I'm sure it will just make me run faster.  So here is the story of my duck pancetta.

I started with a lone breast from Brome Lake Ducks.  In the future I want to find a locally raised duck but this was what my butcher had so I went with it.  This is the Peking duck variety so it suits my spice combination nicely.  Rather than just use salt, I decided to add a five-spice blend to the mix.

My spice blend is based on a Chinese five-spice adapted to my taste buds.  My background is in aromatherapy and perfuming so I always have that in the back of my mind when balancing my spice blends.

2 ml pink peppercorn - milder than black pepper and a beautiful color!
2 ml cubeb pepper - mix between black pepper and clove, lends a beautiful richness
3 ml fennel seed - gives a gentle anise flavour
2 cloves - I find clove can quickly overwhelm so I just used two buds
2 ml cinnamon - probably cassia rather than cinnamon (that is what commercially sold "cinnamon" tends to be because cassia is cheaper to produce and tastes very similar) 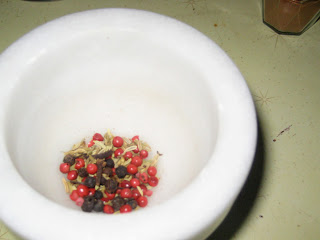 I always toast my spices before grinding.  It refreshes them I've heard so these got a quick toast in a dry skillet and then into my mortar and pestle they went!

I wish you could smell the toasted spices being ground.  Because of my background in aromatherapy I am very scent-driven, scent-delighted and I almost swooned when the perfume of the spices first drifted up to my nose.

The duck breast was rinsed, plucked (just a few little feather ends remained) and scored.  The kosher salt (use a good amount) was mixed with about a teaspoon of the spice mixture and packed into a ceramic bowl with the breast.  I felt quite strongly about using ceramic versus a metal or plastic container.  It just seemed more respectful to the duck. 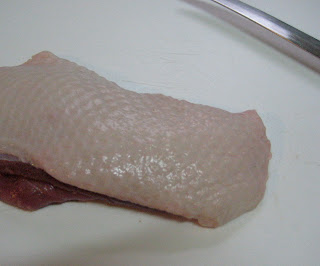 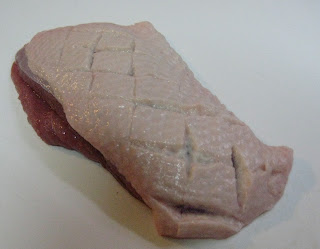 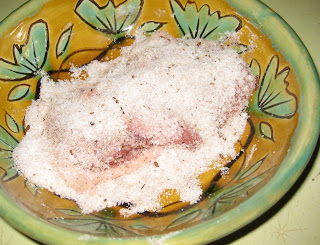 And then into the fridge it went and I waited. 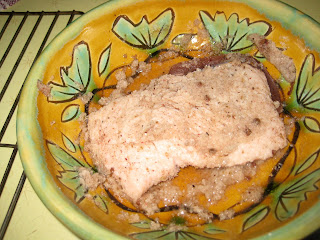 According to Michael Ruhlman, the breast only needs 24 hours of salt curing before being hung up to dry.  Once the curing period was over, I rubbed the remaining spice mixture into the breast gently, and left it in the fridge to dry out for a week. 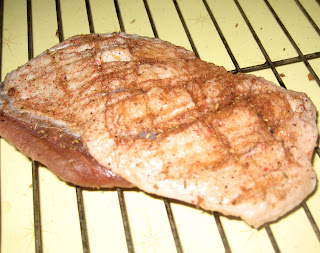 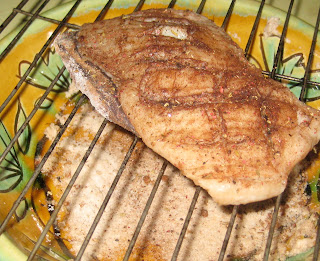 I don't know if the difference between the breasts is obvious.  It dried out quite a bit, which I think is a good thing.  In the recipe it was hung up to dry in a cool spot but I don't have a cool spot so I decided to keep it in the fridge like I did with the pig pancetta.  That probably led to it drying out more than it should have but I've decided to use the entire breast in a braised dish so it should turn out fine.  I can't wait to try my first attempt at 5-spice duck pancetta.