"You can tell a good broth by its aroma, the way it begs the body through the nose.  And pho bac - the pho of Hanoi - is the greatest seducer, because of the subtle dance of seasonings that animates the broth.  It is not just the seasonings that make pho bac distinct, it is provenance…  The history of Vietnam lies in this bowl, for it is in Hanoi, the Vietnamese heart, that pho was born, a combination of the rice noodles that predominated after a thousand years of Chinese occupation and the taste for beef the Vietnamese acquired under the French… The name of their national soup is pronounced like this French word for fire." 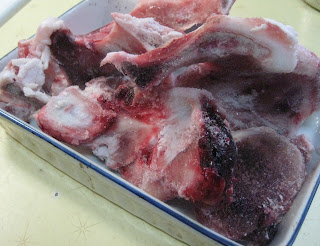 "It's all about the marrow.  You want knuckle bones, leg bones, tail.  And you can get these cheap if you have a relationship with the right butcher." 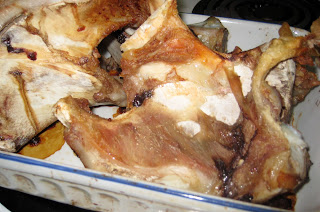 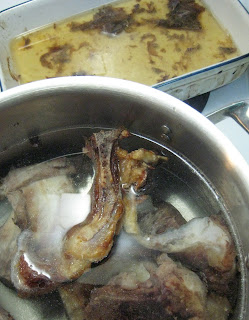 "He is beginning to see that this is not simply a cooking exercise, but one in patience.  For a truly superior broth you need to boil the beef and bones gently for hours, skimming the grey film off the surface of the water before adding the lightly browned onions and ginger, carrot and radish, cinnamon, cloves and star anise, then returning it to a soft boil for several more hours before straining the broth and adding a pungent splash of nuoc mam."
-from The Beauty of Humanity Movement by Camilla Gibb
Posted by Unknown at 3:56 PM