I honestly have no idea how I found out about black lime.  I was probably just skulking around online looking at braise recipes for my last experiment and it must have been an ingredient in one of them.
For those of you who are questioning how black limes relate to meat, please note that once my limes are thoroughly blackened I will use them to season meat dishes.

So, on to blackening my limes.  This can be done with any kind of lime though some recipes called for thinner skinned limes such as key limes.  I am using the regular old thick-skinned limes that are common in North America.

The first step is to boil the limes for 15-20 minutes in heavily salted water.  I used a cup of salt in this pot, which holds about 1.5 quarts of water.  As they were boiling I found that I needed to hold them down because parts were floating above the surface and staying bright green.  Bright green equals bad in the case of black limes.  They are boiled in salty water to take out the bitterness. 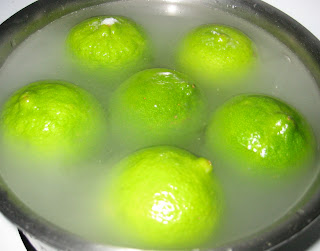 Oooh.  Look how brown these limes look.  Some split a little bit but I don't think that's a problem because you poke holes in them anyways.  I'm hoping it helps them dry out a little faster. 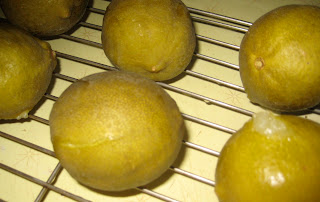 Avec yarn and a skewering rod.  What worked the best for me was knotting the yarn at the top of the skewer and then vigorously jamming it through.  The quicker the better. 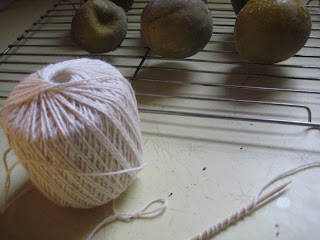 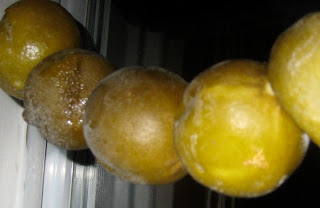 Ahhh...  A lovely string of limes sitting in my kitchen window waiting for the sun to shrivel them up.  More pictures will be posted when they are dry and shrivelly.  I've heard they end up looking like a lime that has been sitting under the couch for several months but the taste they lend meat is unachievable in any other way.
Posted by Unknown at 4:52 PM