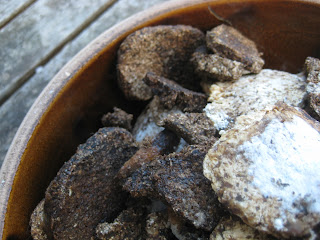 The second stage of making soya sauce is done and part three is well underway.  The second stage, as documented, involved growing plentiful amounts of mold and then drying the mold cakes in the sun.  I found the latter part of the second stage almost unbearable.  Like a little puppy with her favorite toy, every afternoon I carried my tray of soy cakes out into the hot sun so that they would get nice and dry and crusty.  However, they spent the morning in my living room window where the sun is hottest.  The quality of my soya sauce took precedence over everything else, chiefly my ability to spend any amount of time in the living room.  Drying soy cakes are stinky.  I think they are so stinky because they are basically naked, with only cheesecloth to keep away the flies.  The cheesecloth does nothing to contain the smell and even as I write this, about a week after the stage ended, I shudder a little on the inside.

Why am I doing this?  And I don't think I like soya sauce anymore. 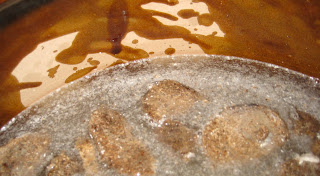 Anyways, once the cakes were nice and dry into my beautiful ceramic pot they went!  With a whole lot of salt and water.  To be specific:
Yeah, I am making a lot of soya sauce.

Then the lid went on and into the hot sunny window the giant pot went.  Of course I am never one to leave things alone so I started looking around online a little and I started to worry that sealing my sauce in would ruin it.  I became obsessed with the need for the sun to touch my fermenting brew and so I decided to, gasp, open the lid.

For those who don't understand why this horrifies me, I should mention that I opened the lid a few days after closing it and the experience wasn't pleasant.  It smelled like rotting so the idea of keeping the lid open for an extended amount of time in my living room wasn't something I thought I could handle.  But as I mentioned earlier, what the sauce wants, the sauce gets.  And so the lid came off and the cheesecloth went back on, damn you cheesecloth.

Then I had another traumatic experience, reminiscent of Lord of the Flies.

After I opened the pot, I left the house.  I was out for the whole day and entering my place at the end of the day I noticed there was little smell.  Quite pleased I strode over to my window and whipped open the curtain to check on my precious sauce.  There were probably about 15 flies buzzing around behind the curtain, above the pot.  Ahhhh!  So freaky.  I quickly closed the curtain, took a deep breath, went back in to put the lid on the pot over the cheesecloth and then got out of the way of the freakin' flies.  Nasty.  Thank god for cheesecloth!

Damn you soya sauce.  I've invested so much effort that I just can't give up on you!

Shonagh explores the guts of food in An Offal Experiment
Posted by Unknown at 9:50 PM