Yeah.  Uh-huh.  I placed first in my category!  I can officially say that I have an award winning pie recipe!  But before I get to the recipe, let me explain my process. 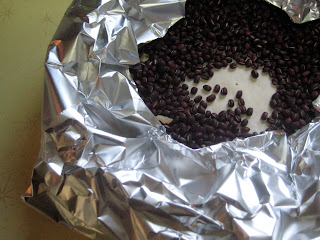 The night before, I blind baked my pie crust.  To blind bake is to bake an empty pie shell.  I like to use parchment with mung beans on top to weigh my pie crust down.  This time, I also decided to shroud my crust in tin foil so it didn't get too brown.  It worked perfectly.  In the past I have tried using a pastry shield but I find that because the pastry shield sits on the crust it actually makes it brown more and faster.  Has anyone else found this?

As well, the night before, I made my sour cherry filling.  I mentioned in an earlier post that I had purchased, roasted and frozen some sour cherries.  To make the filling, I thawed the cherries, cooked them a bit on the stove top just for good measure and then added sugar and Instant ClearJel (see recipe later).  Instant ClearJel is pre-cooked corn starch that thickens acidic fruit without needing heat.  My test pie failed because the thickener I used couldn't handle the acid in the cherries and basically turned my pie into a sopping wet disaster.  This was not going to happen with my sour cherries. 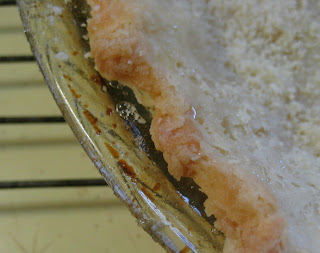 Then into the car I went.  Normally I am a hard core cyclist.  I don't even own a car in fact.  The competition was in Langley though and I was not going to cycle or skytrain out to Langley with my precious pie.  The heat would kill it!  So I found a car (thank you Grandmummy), loaded up the painted crust and the cherry filling, turned the air conditioner on full blast and made my way out to the Langley Bypass.  As I drove, with chattering teeth and goose bumps from the car's chilly air, I reflected on what I was willing to do for this pie:

1. Use chemicals.  I don't think they used Instant ClearJel to thicken up their pies in the old days.
2. Drive.  I hate the car, especially spending an hour on the highway.
3. Air condition myself.  Just the term air condition freaks me out, but hey, what the pie needs, the pie gets.

Once I arrived at the competition, I assembled my pie in the car.  I waited until then because I didn't want to risk a soggy crust.  While the chocolate ganache was there to protect the crust, I still didn't want to take any chances so I waited until just before dropping it off to spoon the cherry filling in.  Then, like an anxious mother, I hustled my little pie into its special room where it sat with all the other pies, waiting for judgement. 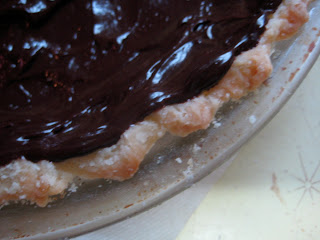 The verdict: And I won!  Yeah, cherries and chocolate are pretty good and it looked so pretty, though you'll just have to imagine what it looked like because in my anxiety I totally forgot to take a picture...  Sorry about that.  Ironically, I'm not really sure what it tasted like.  I only bought enough sour cherries for one pie so I am going to have to wait until next summer to make another one.  I just love the patience in seasonal fruit.

Pastry
1. Cut together flour and butter, add liquid ingredients, chill for 30 minutes minimum or up to 24 hours.  Roll out thinly, pat into pie pan and crimp edges nicely.  Wrap and freeze shell overnight.
2. Preheat oven to 425 degrees Fahrenheit, line shell with parchment and pie weights and put in the bottom third of the oven and turn the temperature down to 400 degrees for 20 minutes.  Pull the shell out, remove the parchment and weights and put back into the oven until golden brown, approximately 10 minutes.
3. Sprinkle baked shell with almond flour.

Cherry Filling
1. Coat sour cherries with oil, salt and pepper.  Bake at 350 degrees for approximately an hour or until the cherries split.  Let cool.
2. Add ClearJel to sugar and mix well.  Stir into cooled cherries and stir to combine well.  Thickens up in approximately 5-10 minutes.  Chill in the fridge.

Chocolate Ganache
1. Put whipping cream in a saucepan and warm at medium-low heat until small bubbles form at the edges.
2. Pour half of the cream over the finely chopped chocolate and let sit for 30 seconds.  Whisk gently as chocolate melts.  Once almost smooth add the rest of the warm whipping cream and stir to combine.

1. Paint the warm chocolate ganache on the baked pie shell.  Make sure to spread the chocolate over the entire base of the shell and up the edges.  Let chill in the fridge until the ganache hardens. Approximately an hour before serving put the chilled cherry filling in the chocolate-filled shell and allow to come to room temperature. 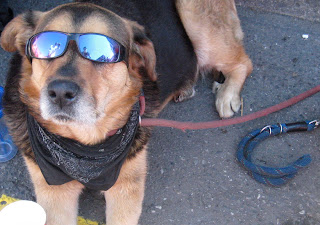 Shonagh explores the guts of food in An Offal Experiment.
Posted by Unknown at 10:15 AM