Suffice to say that I have a greater understanding of the scent of a medieval household after my first experience rendering suet.

I've been reading The Great Mortality by John Kelly, a riveting account of the black plague and how it wound its way through Europe in the 14th century.  Needless to say a key ingredient in its spread was the incredible filth of households in this period.  People bathed rarely and garbage (think dead animals, toilet offerings, rotten food) was strewn about the streets.  They also used lard or tallow in making candles.  According to Kelly, lard wasn't a preferred source of fuel because of the smell.

So let me get this straight.  People who were surrounded by rotting flesh and human excrement complained about the smell of burning lard.  How could this be?

Let me tell you.  It is a penetrating and murky smell.  Those familiar with the smell of their house after a deep fry session will have some idea, but rendering lard is worse.  It lacks the richness of cooking meat and the purity of cooking with vegetable oil.  It just smells heavy, and not in a good way.

I would like to think that I have a fairly strong stomach.  I mean I did saw open a sheep's head after all.  Despite the strength of my stomach, I will probably never render suet again.  But what inspired me to bother in the first place?  It was the pie competition. 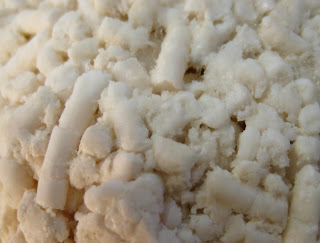 According to the Joy of Cooking lard makes a "very tender crust (that) is best reserved for covered fruit pies" (p. 862).  Did I want a "very tender crust" and was I making a fruit pie?  Yes on both accounts.  I was sure that using lard would give me an upper hand on my competition.  With this in mind, I trotted to my butchers.

Lo and behold they had bags of frozen suet, ground up and ready to go.  Luckily one of the butchers told me that I would need to render it before I used it for my pie.  Armed with this information and clutching my little bag of ground fat, I trot home, sure that I was about to have a pastry breakthrough. 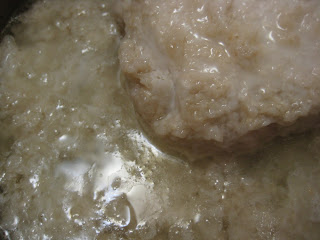 Before getting started I decide to do a little research.  There is a wet method and a dry method of rendering fat.  The dry method is used during normal cooking - think of frying bacon and then using the wonderful extra fat to fry your eggs.  The wet method involves throwing, in my case, a big chunk of suet into a pot with water and letting it cook on low for hours.  As it cooks the fat melts out and can be poured off through a strainer.

I didn't use a lot of water so the water had evaporated before I poured the fat off.  If you are using a lot of water then the fat can be skimmed off the top.  As this fat and water-filled mixture steams and bubbles away for hours your house will be filled with its distinctive odour.  I highly recommend closing all doors to bedrooms to prevent the smell from making friends with your clothing. 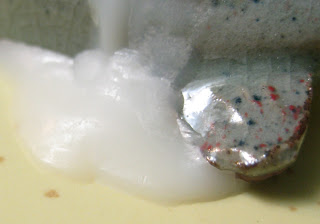 The rendered lard is quite beautiful, lily white and pure.  Its hard to believe that it came from a murky, flesh-colored pot of melting suet.  Once the process was complete (well to be honest, once I had rendered enough lard) I took my hot pot of suet off the stovetop and thanked the spirits that the process was over.

To ready myself for the pastry-making process (this was for my second test pie - the disastrous one) I froze the lard.  I grated the frozen lard into my flour, using butter for half the fat, finished my pastry, filled the pie and waited for ecstasy.  The pie was a disaster because I was experimenting (a combination of different recipes and my imagination) and miscalculated the cooking time.  Once my pie had "cooled" I realized that it wasn't hardening and in fact I had made strawberry soup pie.  Luckily I was still able to taste the lard-filled pastry on top.

It tastes like beef.  The texture was nice but the beefiness came through so strongly that it overpowered the delicate fruitiness of the filling.  Mmm strawberry-beef fat pie...  No, not so tasty.  It might work for a beef pie but even then I question the flavour the lard gave the pastry.  Some would call it the essence of being not tasty.  I have since read up more on lard and possibly, possibly will try pork fat in the future.  Emphasis on the possibly because I don't really want pork fat perfume wafting its way through my house.

Back to pure butter pastry for me!  I would love to hear if others use lard in their pastry?  Do you render it yourself or do you buy it from the butcher?  Do you use pork or beef?  Share your pastry and lard experiences.

Shonagh explores the guts of food in An Offal Experiment
Posted by Unknown at 6:40 AM