The rhubarb theme continues in my mother's garden.  My niece was visiting from LA and the family decided to celebrate her "Almost 1" birthday since she wouldn't be in town when she actually turned one.  It was the perfect opportunity to use up some of my mom's rhubarb and introduce my wee niece to a new taste!

But first I needed rhubarb inspiration.  Epicurious is so helpful for this.  They had a ton of rhubarb recipes - rhubarb upside down cake, rhubarb pie, rhubarb cheesecake, the list went on...  For once though I didn't want to spend hours prepping and/or making my dessert.  I wanted simple and delicious.  Rhubarb fool was the obvious choice.

I attempted to figure out where the name for this light and airy dessert came from and found nothing concrete.   However, the OED gave me a few hints.  The word, when it was originally used and when the dessert was originally served, had a much gentler meaning than the modern usage.  It was almost a term of endearment, which makes sense in the context of the court jester being the Crown's fool.  The term was also referenced in the Feast of Fool's, a dancing and feasting church celebration in the Middle Ages.  If I were to hazard a guess, and I am always willing, I would imagine that fool refers to the light and airy nature of the dessert.  It is not a dessert to take seriously like a heavy cheesecake or a rich chocolate pate.  It is more appropriate to joyfully spoon it on top of other desserts, as if it were a bit of a joke.

A fool is a simple dessert and perfect for the summertime.  It is basically stewed fruit layered with whipped cream.  Yummy!  I decided to add a Middle Eastern twist to mine.  Feel free to play around with the flavours.

Ingredients
Directions
1) The rhubarb needs to be chopped into 3/4 inch chunks.  Keep the pieces fairly large because you don't want them breaking down completely when you stew the rhubarb.  A fool needs some texture. 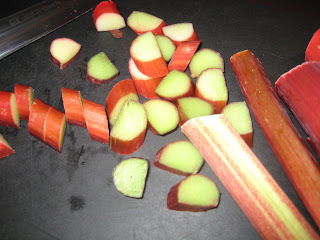 2) Add the rhubarb to a heavy, non-reactive saucepan with the freshly squeezed orange juice, orange blossom water, honey and vanilla pod (scrape out the seeds to use in the whipped cream, see note below for instructions).  Cook down on low to medium heat until the rhubarb is soft but not mush.  Start to check your rhubarb at ten minutes and keep an eye on it after that.  Once it is at a nice consistency, pull it off the heat and add two oranges worth of zest to the stewed fruit.  Let it cool completely. 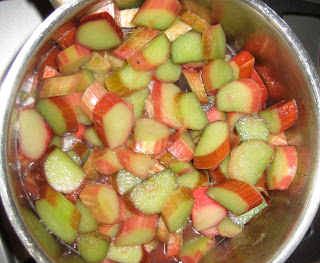 As it cooks and then cools you will have some free time to spend with your family - in my case, my wee niece.  This is an excellent opportunity to introduce her to a new flavour: rhubarb! 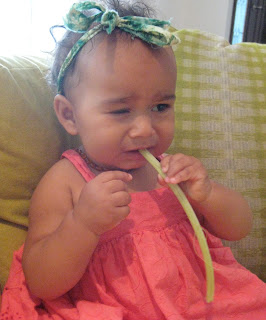 As you can see it's a little sour, not that the sourness stopped her from munching on it for quite a while.  It's good to see an adventurous palate at such a young age.  Oh the food adventures I will take her on as she gets older!

3) Once you have finished socializing, head back into the kitchen to whip the cream.  I used a hand mixer and I recommend a deep bowl and an apron because whipping cream can be a bit messy.  As you whip it, add icing sugar to taste as well as the vanilla seeds that you scraped from the pod (see below for instructions).  Whip the cream until it is whipped!

4) If the rhubarb is cold and the cream is whipped, it is time to assemble your fool.  Start with a layer of stewed rhubarb and then add a layer of whipping cream.  Then GENTLY spoon another layer of rhubarb on top.  You want to create distinct layers and if you slosh the stewed fruit onto the delicate whipping cream it will muddy up your presentation.  Finish with a layer of whipping cream and then zest the final orange on top to make your fool look extra pretty.  I wanted to add toasted, sliced almonds on top for garnish but they burned because I was too busy kissing and cooing over my niece.  Such is life! 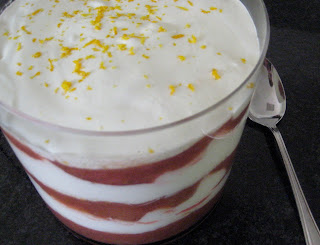 Rhubarb fool is wonderful on its own.  It's also great spooned onto pie or cake.  If you are feeling like extra work then you can make beautiful single servings in wine glasses.  Dressing up like a jester is optional but would be a hilarious compliment to your fool.