For those that follow my blog, you will remember the start of my love affair with cured pig cheek or guanciale.  A traditional use for this lovely fatty pinch of pig is in carbonara, a traditional Roman pasta dish full of egg and cheese and guanciale.  Sounds pretty good right?

So I decided to "treat" (not this time unfortunately) my Dad to a dinner while my Mom was away.  This seemed to be a win-win situation in many ways.

First, I get to hang out with my Dad, which I always enjoy.  Second, he doesn't have to eat take-out for at least one night (my Mom is the cook, he is the dishwasher).  Third, he is very accepting of food and so is the perfect target for new and/or untested recipes.  Fourth, he eats gluten and my Mom doesn't, and finally, it is the opening ceremony of the London Olympics and he has a giant TV and I have none.  What a perfect situation!?

What a perfect foil for an untested recipe...  Please allow the story to unfold. 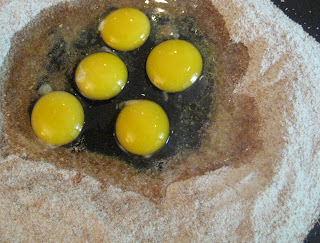 1) Everything started out well.  I was a bit nervous about making pasta for the first time, especially without a pasta machine but being experienced with handling dough I thought should hold me in good stead.  It did.  The kneading went well.  I chose to use whole wheat flour from the Flour Peddler so I reduced the flour in the recipe just a little bit to account for this.  It came together nicely and was popped into the fridge to relax.

2) While the dough was relaxing I cubed the guanciale and allowed it to slowly render with the sprigs of thyme.  It smelled beautiful.  I also shelled my peas in anticipation of the grand cooking finale.

I started to roll, and roll, and roll.  Every once in a while I picked the dough up and flipped it over, gently slapping it against the granite counter top.  Roughing it up a bit is good for the gluten development, think of it as giving your pasta character.  It was getting quite thin but wasn't as thin as my book said and here is where the first mistake occurred.  I started to panic.  My Dad was sitting at the dining room table doing some work and I became sure that he wanted to eat and was getting impatient (he wasn't, I was just getting anxious).  Mistake 1: I rushed the process...  Never rush the process.

4) My too-thick pasta was dumped into the boiling water and promptly thickened up until it resembled flattened earth worms.  I guess I never realized how much pasta thickened up as it cooked until I made it myself.

5) As the pasta cooked (it only takes about 3 minutes) I had to work on the carbonara.  The peas had been added to the guanciale before the pasta went in so they would have time to soften (dump out some of the guanciale fat before adding the peas and make sure you give the peas a good amount of time to cook).

6) The parmesan was mixed with the eggs and whisked together.  Then about half a cup of pasta cooking water was slowly whisked into this mixture until it became smooth.  As I was doing this I anxiously watched the pasta cook and stirred it so it didn't all stick together.  Then the moment of truth and the secret to amazing carbonara (besides fantastic ingredients).

The pasta is whisked out of the boiling water and thrown in with the guanciale and peas.  The egg/cheese mixture is poured on top and the whole mess is gently tossed for only about a minute until it is shiny and beautiful! 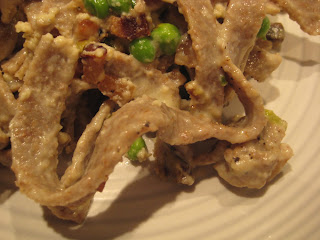 Mistake 2: Never, never, never return a carbonara sauce to the heat once it is done because you fear the pasta is underdone.  It cooks the egg too much and becomes a lumpy mess.  Again, I panicked.  Honestly go for an undercooked pasta rather than an overcooked carbonara sauce, not to mention that an extra 30 seconds on the heat is not going to do much to your pasta anyways.

Panic is not a good ingredient in food.

The verdict: It tasted good.  The whole wheat flour lent a stronger taste to the pasta than regular white pasta but personally I don't mind when my food tastes like what it is.  It was definitely toothsome.  The carbonara was a bit lumpy because of my panicked overcooking but delicious nonetheless.  In the words of my father:  "Well, it's not a very pretty looking dish dear but it tastes good."

End note: You are probably wondering why there are only two photos.  Carbonara, even the mess I made of it, doesn't leave much time for snapping photos.  It all happens in the blink of an eye and I am just not willing to sacrifice my end product for a photo.  Not to mention that by the time I was done I just wanted to sit down and eat, as did my father.

Shonagh explores the guts of food in An Offal Experiment
Posted by Unknown at 8:38 AM